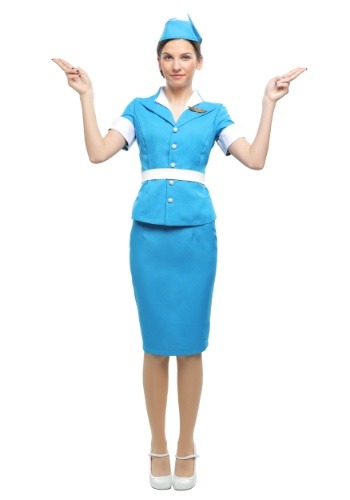 We could do an impersonation, though we will be the first to admit that our impersonations are not all that great. We could rap, but in order to rap, we would need a sense of rhythm... We could sing? We have enough rhythm to sing, we might have to go that route. We could sing the instructions to the rhythm of Don't stop believin' by Journey! People would dig that, we have a good feeling about it!

This costume is so realistic that if you wore this on a plane, you'd probably get fired from a job you never had for sitting in a seat the whole flight! That would make for a great story. You'll be wearing a jacket and skirt, both of which come in sky blue and white! You'll be wearing a white belt over the jacket, and a hat on your head. Last but not least, we've included a little pin for your shirt front, just to add an extra sense of authenticity. All you will need now is a pilot and a plane and you'll be ready for your first day on the job!

When you join the flight crew, you get to join an elite club filled with people in the airline industry. Maybe once you get there, you could invite us? We'd love to be able to step into the cockpit of a plane while it's flying!