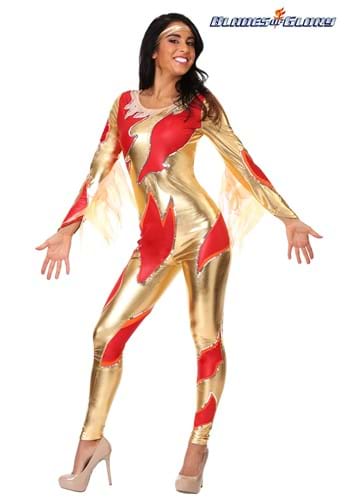 Fire and Ice! Well, just fire in this case, but you know what we're getting at. Meet 1/2 of the infamous duo of Fire and Ice, Chazz Michael Michaels. Aside from having the bro-est name ever, Chazz is ice skating's bad boy. At this point in the movie, Chazz received a lifetime figure skating ban due to his, let's say, provocative actions. He was roped into becoming the first same-sex ice skating couple by his arch-nemesis Jimmy MacElroy. This has got to be one of the funniest sports comedy movies of all time. Yes, there is a bit of raunchy humor, but it was 2007, for goodness sake. Every other movie that came out around this time stayed in a similar vein of comedy, but if you are here, that's probably doesn't bother you.

Are you looking to make a splash at the next office costume party? Our Blades of Glory Female Fire Jumpsuit Costume will definitely do just that. Do you want to have your friends howling with laughter as you make pose after pose from the movie? This officially licensed costume is so close to the real thing you'll be able to bring the house down as you cite the movie's many quotable lines (we made it ourselves!). And hey, if you haven't seen the movie but just want a cute ice skating outfit, here you go.