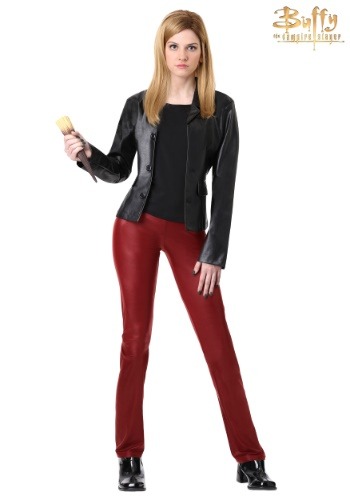 Slay It, Don't Spray It

High school can be a horror show. There's so much drama. You never know when a rumor might ruin your week or a Bezoar will start taking over the bodies of your classmates. Which is worse? It's hard to say. Depends on the intensity of the rumors. Because if you're the Chosen One than you might be able to take out the Bezoars long before the rumors die down. The lucky thing is, sooner or later high school will be over and you'll have graduated to a full-time slayer.

Whether you're still in the realm of the Hell-mouth or you're looking back on that era with a dark feeling of nostalgia, this Buffy the Vampire Slayer costume will make you ready to face whatever demon might be heading your way. Fighting the good fight can be a lot of work, might as well make sure you look good while doing it!

We put our biggest Buffy fans on the case when designing this licensed Buffy the Vampire costume. And while we might have lost hours on end rewatching all seven seasons of the show, we think our efforts paid off in the end. Buffy's look features fantastic marroon vinyl pant and a faux leather jacket. Layer a boat neck black tank underneath for a distinct nineties and early 2000's style. The costume is finished off with a foam stake so that you'll be ready to slay as soon as this costume arrives at your door.

Once More with Feeling

It's never too late to return to comforting and nostalgic Sunnydale. At the same time, there's only so many times you can rewatch your favorite show. Why not bring it to life this Halloween? Pull-on your vamp-butt kicking boots because, as Willow would say, this costume is sure to put the "grr" in girl!