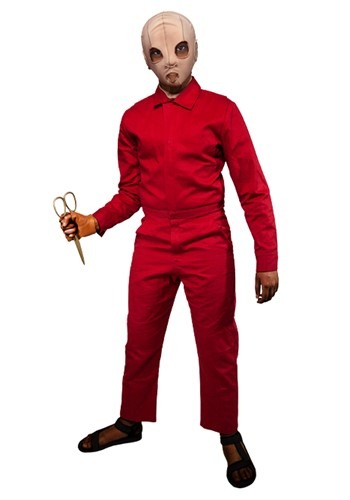 US Child The Tethered Costume For Adults

Do you ever feel like you have a doppelgänger, like, there’s a clone of you out in the world? What would it be like if you two ever met? Do you think that the two of you would get into all sorts of zany situations? Would you and your double pull hilarious pranks on people? Or do you think it would want to become “untethered” and try to kill you? Well, that’s what Jordan Peel shows us in his psychological horror film Us.

According to the movie, having a doppelgänger is a terrible experience. Leave it to the government to make secret clones of people in order to control the masses, abandon the experiment, and lock away the clones, leaving them to plot their revenge against us all. Typical. Anyways, now you can dress up as one of the Tethered with this officially licensed Us costume.

With this simple costume, you can look just like Pluto. Not the friendly dog from Disney but the terrifying clone of Jason that tends to act like a dog, and not a nice one either. First, toss on the all red jumpsuit. It has a collar and a zipper that goes down the front. There are also snap buttons on the top of the jumpsuit so it matches the outfits the Tethered wear in the film. Along with the jumpsuit, there are also two accessories included. There’s a single fingerless glove with a snap button by the wrist and a plastic pair of scissors that’s approximately 10” long. Grab Pluto’s Mask and you’ll be sure to give people a scare wherever you go in this getup.

Go out as your devilish doppelgänger this Halloween. Cause some mischief and blame it on your clone the next day! Who’s to say it wasn’t your government-made double?