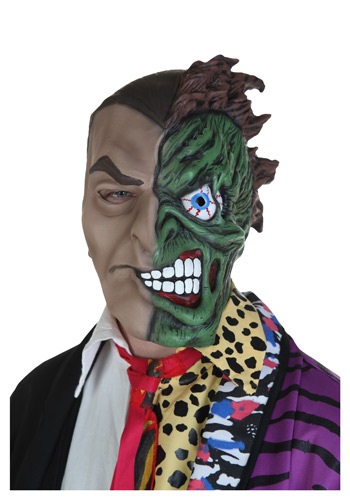 On second thought maybe, you should just stare straight ahead. You look fine on one side. . . the other could use some work. Poor Harvey Dent, he tried so hard to escape his dreadful circumstances. Even though his childhood was a complicated one, he ended up rocking the world of law and order by becoming Gotham City's youngest district attorney at the age of twenty-six, until he was attacked with acid, that is.

With all that he's been through, we all should send Harvey a little love! Plus, we think flipping a coin to make decisions makes life much more interesting. Deciding whether to go to bed early or stay up all night and binge watch your favorite television show by a coin flip sounds fun to us, no flip-flopping allowed.

If you think that living by the whims of a two-sided coin sounds nice then you'll love dressing up as the famous Two-Face sounds like a good time, then you'll need a high-quality mask. One side of the mask is the charming Harvey Dent with your typical skin tone, the other half is the stuff of nightmares! The grossly degraded side is made up of degraded ligaments an exposed jaw, and a glaring eyeball for that shocking DC villain look. Pair it with a two-sided suit for a complete Two-Face look!