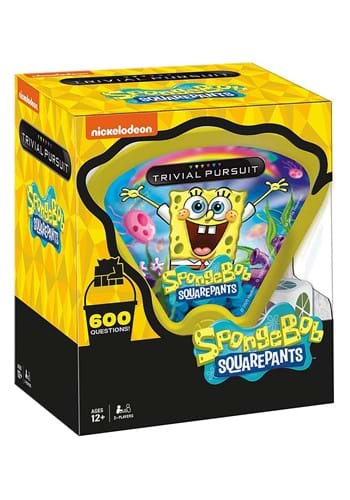 We can be honest. We stink at normal Trivial Pursuit. Whenever we play it, we just stare blankly as someone reads a question about some ancient civilization that no one has ever heard of. We try our best to give the right answer, but we're pretty sure that "Chocolate Ice Cream" was not the first important invention of Aegean civilizations... and our little game piece stays empty of pie pieces for quite some time.

The good news is that Trivial Pursuit decided to make a version of the game that plays to our strengths! This SpongeBob SquarePants Edition Trivial Pursuit Game is for people who have watched every episode of the classic Nickelodeon cartoon series.

This SpongeBob-themed board game comes with everything you need to test your SquarePants knowledge. The game comes with a deck of trivia cards, a die, a rules card, and a wedge-shaped case. The cards come with 6 different categories of trivia, which includes characters, songs, locations, The Krusty Krab, seasons 1-6, and seasons 7-12. The person who is able to answer a question from each category first wins! With over 600 questions, even the most invested fans will be wracking their brain for the answers!