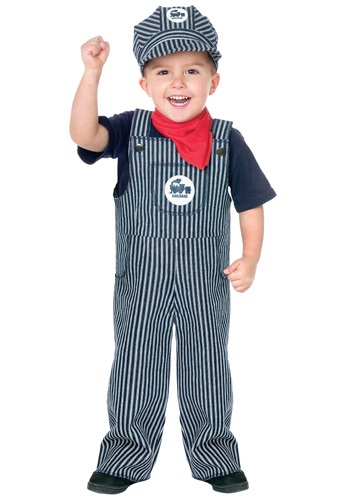 All Aboard, Next Stop Candyland!

It’s Halloween and somebody has got to get that trick-or-treat train a ‘chugging! Who better to take the wheel (or is it a lever?) of the Halloween locomotive than your youngster?! He can be the conductor of the train on your way through the neighborhood this year and gather more sweets than he’s ever seen in his young life. So, all aboard! This train is leaving the station and headed straight to Sweetsville, no stops so plan accordingly.

Choo-choo your tot is coming through! Clear the tracks because this is one train that won’t be slowing down. There’s too much candy to collect and too little time. Grab this Tots Train Engineer Costume and let your kiddo live out his fantasy of being a conductor this Halloween. This will also be a great outfit for when he’s at home playing with his toy trains! With his imagination and this costume, he’ll feel like he’s really running these trains.

This costume is made up of a pair of overalls, a scarf, and an awesome train conductor hat. There are decorative silver-tone buttons that conceal the actual Hook and Loop fastener closure. A ‘PEC Railroad’ patch is sewn on the bib of the chest pocket. The handkerchief is red broadcloth and is cut in the shape of a square. The hat matches the design of the overalls and also has a ‘PEC Railroad’ patch at the front center.

Nothing Better than a Smooth Running Train

Give your little train fanatic the Halloween of his dreams when you make him the conductor and dress him up in this Tots Train Engineer Costume. A lot of kids want to be some sort of monster and the others want to dress up as their favorite athletic superstar but your kiddo is different. He's more content with the simple whistle of a train and a seemingly never-ending track ahead of him.