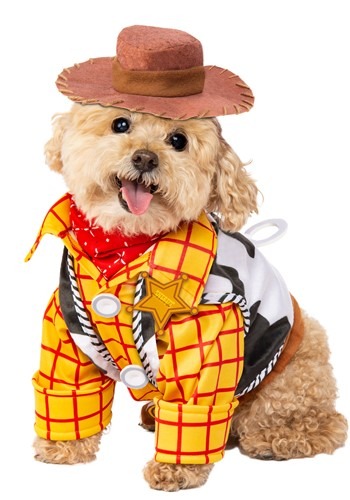 Too long has Woody been a hair jealous of Buzz and his time in space. Woody has been seen gazing up into the night sky at the moon and wondering just a little too long what wonder might await him. 'Cowboys look into the campfire,' the other toys tell him, yet the moon calls him so! It was only a matter of time before the mystical power of the legendary moon would take hold and cause Woody to burst out in fur and go from wrangling cattle to chasing tennis balls!

Now that Woody has become a bit more 'woofy,' he's going to need a new home. Can't have him chewing up on the other toys. That's why this Woody costume for dogs is perfect for your pooch! This shirt, bandana, and hat have elastic as well as hook and loops to fasten comfortably. The whole look will give your pupper a look inspired by our favorite Toy Story character!

READY FOR A NEW MOVIE

The long-awaited Toy Story 4 won't be enough after your dog gets dressed up in this Woody costume. It's time for a spin-off featuring Were-Woof Woody and the rest of the characters in our Toy Story pet costumes.