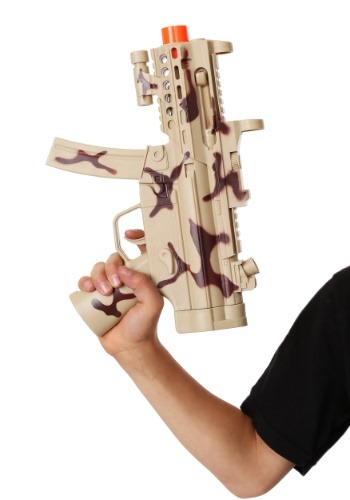 We all dream of being the action hero in a movie. You know the type. They race through a skyscraper, while defeating a legion of bad guys in the process. They save some innocent hostages, finish off the evil leader of the baddies, and then they get to head home as the everyman champion. Sometimes, they trudge through the jungle, fighting against a dangerous alien that’s trying to hunt him.

Real life isn’t quite that glamorous. Normally, you spend the morning stuck in traffic. Then you spend the majority of the day slogging through work. Maybe you head to the bank and stand in line to make a deposit during your lunch break, only to get caught in traffic on the way home. You might find yourself daydreaming about what it might be like to actually live the life of an action hero…

Well, this toy machine gun will help you feel a bit more like an action hero! It has a desert camo paint job and it even makes sound effects when you pull the trigger. The tip of the barrel is orange, ensuring that people recognize this neat little gun as a toy.

This toy works great for any kid who wants to fight against imaginary bad guys in the backyard, but adults can have plenty of fun playing the role of an action hero with this little toy!