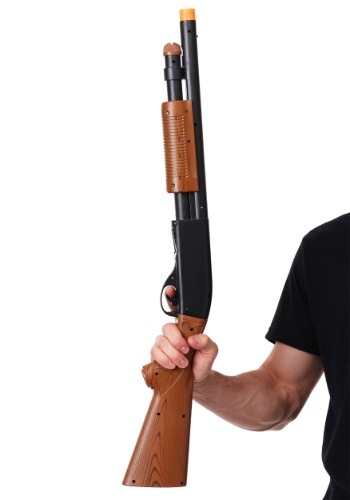 Meant to be read in the deep voice of a movie trailer announcer.

No one suspected the humble duck. That was humanity's downfall. One second, those little birds were quietly quacking while gobbling up breadcrumbs at the local pond. Then, everything changed. Their quaint quacks turned into ear-shattering battle cries. Their hunger for bread turned into a craving for calamity. They swarmed cities. They began pecking humans with their round little duck bills. The green head of a mallard suddenly became a symbol of doom. The Duckpocalypse had come and all hope seemed lost, but one hero, armed with a toy shotgun, would become the savior that the world needs to stop the mallard menace...

Now, you can become humanity's last hope against the Duckpocalypse. Just arm yourself with this toy shotgun accessory and you can battle against the feathered forces of evil. The toy shotgun has a pump-action design. You can even load real toy shells (included) inside of it, which eject when you use the pump-action. It makes realistic sounds when you pull the trigger, making it a great toy weapon to use when fighting against evil imaginary ducks.

Head out into the world and show those avian villains that humanity will not be toppled so easily! Just arm yourself with this toy shotgun and you can single-handedly stop the inevitable Duckpocalypse.