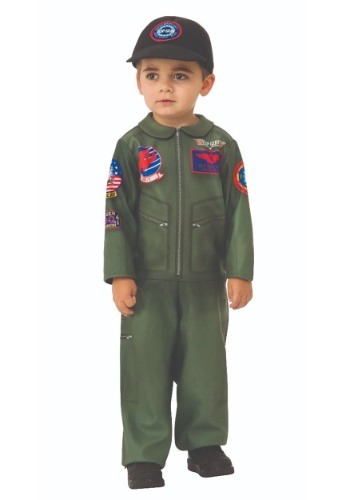 The Need for Speed

You can see it in your kid. They have the need for speed. Even when they were just learning to crawl, you could see the gleam in their eye as they tried to shimmy faster than any other baby had done before. As they tried to take their first steps, you could see the desire for speed as they hobbled along. It’s only a matter of time before their tearing through the neighborhood on their big wheel as maximum velocity. Sooner or later, that won’t be enough though. They’ll need to take their obsession with fast vehicles to new heights… literally! They may even want to enter the Top Gun school of fighter jet piloting!

It’s inevitable. If that’s what your toddler craves, then you should begin the long journey of training them to be a top pilot, just like Maverick. That’s where this Top Gun toddler costume comes into play.

This officially licensed Top Gun toddler costume is a cute look based on the iconic movie! It comes with a dark green jumpsuit, like flight suit worn by Maverick. The front has a zipper and is adorned with various designs, like the American Flag, the Top Gun logo, and a Maverick name patch. The costume even comes with a baseball cap, which has the Top gun Logo on the front.

Once your child is all geared up in this Top Gun costume, they’ll be ready to satisfy their need for speed! Of course, it might be a few more years before they can jump behind the controls of an F-14 Tomcat, but with this outfit, you can always just pretend that their car seat is the cockpit of a real jet fighter. Also, be sure to check out our adult Top Gun costumes, since your little one may need a co-pilot. You could even dress up like Goose!