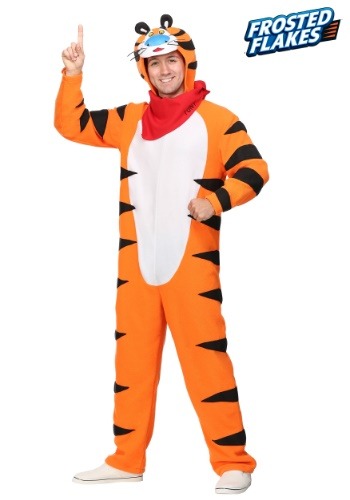 Tony the Tiger Costume for Adults

Looking good, Tony! That peppy tiger always has so much energy and style. We don't know how he does it! He's been spreading the word about Frosted Flakes since 1952 and that tiger still looks great for his age. What's his secret? Maybe it's because he never skips the most important meal of the day!

Well, you can get the Kellogg's character's gr-r-reat look when you wear this officially licensed Tony the Tiger Costume! It comes with tons of great details to help you feel like the cartoon tiger from the commercials.

The costume comes in an adult size and starts with a simple orange jumpsuit. The suit has a zipper in back and has Tony's black tiger stripes along the sides. The chest is white, just like Tony's tummy on the cereal box! The red bandana ties around the neck to bring the whole look together. And, of course, the best part about this costume is the character hood! The attached hood has Tony the Tiger's happy face designed into the top, along with a pair of ears poking up on top! It's a gr-r-reat look for anyone who still loves breakfast cereal as the perfect Saturday morning snack!