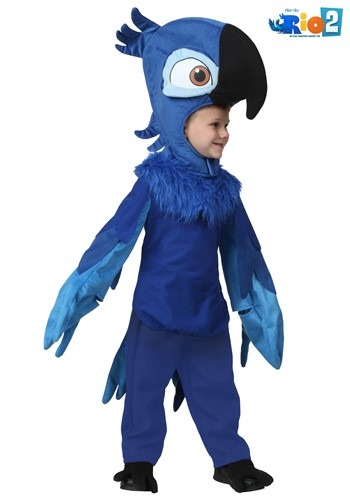 Has your little one ever dreamed of flying? Maybe he wants to be a helicopter pilot, or get behind the controls of a fighter jet. Maybe he’s tried to come up with own flying machine like Leonardo da Vinci (hopefully you stopped him before he succeeded in leaping off the roof!). Maybe he wants to skip the middle man and just dreams of being a bird, like a majestic eagle or a ferocious hawk.

Well, if that’s the case, we recommend that he doesn’t pin his hopes on becoming Blu, the hero from Rio. Sure, this little Spix’s Macaw is a beautiful and exotic bird, but he can’t actually… fly. At least, not at the beginning of the movie. It takes quite a lot of time and effort for Blu to earn his wings, so to speak, and we’d hate for your little toddler to go through all the bumps and bruises poor Blu experienced before finally taking to the skies.

Flying aside, if your toddler is dead-set on becoming just like Blu, we can at least help in the looks department with Toddler Rio Blu Costume. The officially licensed blue two-piece costume is 100% polyester flannel. The shirt has wing-shaped sleeves with wrist slits and feather-shaped shoulder drapes, while the flannel pants come with an elastic waistband for a comfy fit. There’s also a headpiece with a soft-sculpted beak, eyes and feather tufts on top, while the included shoe covers have a Hook and Loop fastener band at the ankle for easy connection. Your little guy will be ready to flap his wings and go in this Toddler Rio Blu Costume… even if he doesn’t really take to the skies. Just keep him away from the roof!