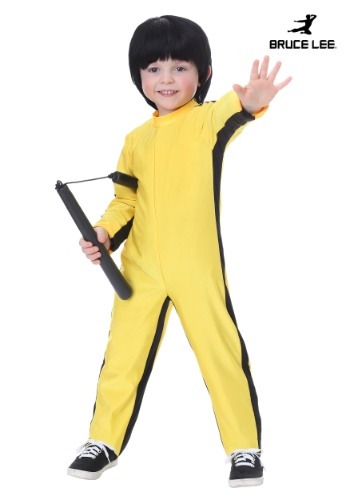 The Greatest of All Time

It's no secret. Bruce Lee was one of the raddest dudes of all time. (Yeah, we know raddest isn't a real word, but we decided to use it anyway.) He had lightning-fast reflexes, amazing martial arts moves, and a wild spirit to match. He brought kung-fu into the mainstream and craft some pretty killer action movies during his prime.

Of course, your little one might not have the same impressive resume that Bruce Lee has (don't worry, no one does), but we're willing to bet that your little one is one rad dude! With a little encouragement and the right outfit, he may just become the next big kung-fu master. It all starts with this Bruce Lee Costume for toddlers, which takes its inspiration from Bruce Lee's classic film The Game of Death.

This officially licensed toddler costume will have your child ready to show off their moves! The costume starts with a simple yellow jumpsuit that has black stripes running along the sides. It stretches to fit and comes with a zipper in the back, so your child can get suited up in this classic martial arts look with ease. The costume also includes a wig, which is made out of synthetic fibers and fits with a mesh cap underneath. Just place it on your child's head and they'll be ready to showcase their best kung-fu kick to the world!

Dress your child up in this martial arts style outfit and he may just be ready to star in his own action flick! You could even choreograph and epic battle between your little tyke and his arch-nemesis... or you could just take your little jeet kun do master on a trip through the neighborhood for some trick or treating.