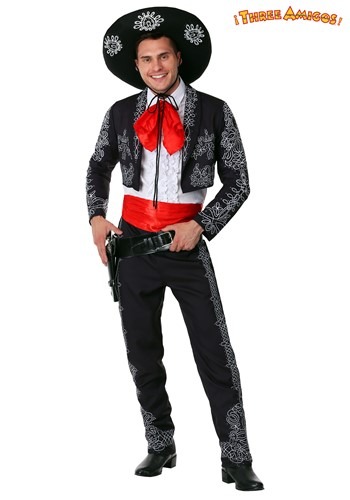 The Three Amigos Costume for Adults

Some quests are taken out of noble desires. To bring peace to the innocents and bring down a horrific warlord and bandit captain that threatens the livelihood of all. For such a noble goal, the heroes who try to save the day will be regarded as heroes even before they've finished the task! After all, this is a pretty deadly undertaking and... all of those bullets? Yeah, those might be real. The whole thing!

That kind of realization might be pretty scary if you started your day just thinking that you were going to have a fun session acting out your favorite characters with a couple of your friends. That's why we've learned it is important to ask all the questions about a job right away! You don't want to head in and start singing a lovely group song in a bar full of gunfighters when all you've got is a shiny smile and the illusion of countless victories over the banditos!

Fear not, though. When you're garbed up in our officially licensed look from The Three Amigos, you will be recognized for the fame and funnies rather than the firearms! This exclusive look features an exquisitely embroidered screen-printed hat, jacket, and pant combo along with a ruffled white shirt and a matching red tie and cummerbund. In an instant, you'll be transformed into one of your favorite characters from the hit film. Dusty? Ned? Or are you really feeling Lucky, today!?

THE HERO OF OUR HEARTS

Practice that iconic salute (especially the hip thrust part) and show the world that you have everything you need to save us all! And, if you're concerned about going at it all your own, just team up with the rest of the trio in an entire costumed collection. If nothing else, we guarantee we'll join you in a group song at the cantina!