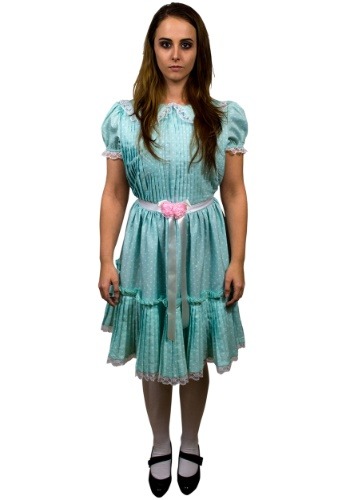 Have you always wanted to go to the Stanley Hotel in Colorado to see the place that inspired Stephen King to write his unforgettable novel The Shining? We'd say we were interested but honestly, we've been scared so badly that we were scarred. Here's a word of advice. Don't listen to an audiobook of The Shining when you're home alone and it's snowing outside. Yeah, that room 217 bathroom scene is brutal. A shower simply isn't an option after that. So if you're a fan of this story then that classic scene with the twin girls probably sticks out in your memory. Whether you read the books or watched the movies, those little girls are hard to forget! Maybe it's because of the creepy way they speak in unison or perhaps we can't forget them because they are juxtaposed with gore. Either way, they've worked their way into mainstream media throughout the years!

This costume looks like it's straight out of Stanley Kubrick's classic horror movie. The top has a finely pleated top with a Peter Pan collar and puffed sleeves with lace trim. The waist is belted with a satiny white ribbon with a rosy center. The skirt is pleated from the waist with heavier pleats on the bottom. Trimmed with lace on the hem, this skirt looks retro and will be the perfect way to pair up with your chosen twin.

No one will "Overlook" this costume

If you love The Shining, you'll love teaming up with a friend and freaking everyone out with this costume. This blue dress looks like it's straight out of the unforgettable scene with poor, poor Danny in the hall. Whether you're dressing up for Halloween or you're looking for the perfect outfit for a movie-themed bash, you're sure to love the horror of dressing up as the twins.