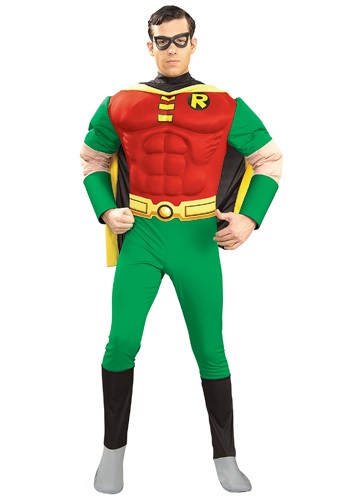 You know, Dick Grayson always gets labeled as Batman’s sidekick, but if you look at his long history as Robin, he’s so much more than just the “Boy Wonder” from old Batman comics. He solved plenty of crimes without Batman’s help and even went on to lead his own team of superheroes, the Teen Titans. Catwoman commented on Dick’s crazy agility that he gained from training as an acrobat, which even tops out Batman’s. He’s defeated Deathstroke on more than one occasion. He studied martial arts under Richard Dragon. Word on the street is that he’s a much more likeable guy than his mentor. That’s a lot of accomplishments to rack up for a young guy!

It’s time for you take on the mantle of Robin with this officially licensed Teen Titans Robin costume for adults. The costume is based on Dick’s appearance in the Teen Titans cartoon series. It comes with a jumpsuit that has a red top with green pants. Muscle padding in the chest and arms helps you look ready to trade a few blows with Slade. A faux utility belt is included as well. Of course, it also comes with a cape and black eye mask to put the finishing touches to the look.

So, when people inevitably try to label you as “Batman’s sidekick” while wearing this Teen Titans Robin costume, be sure to kindly inform them of Robin’s many feats. They definitely won’t try to write you off anymore!