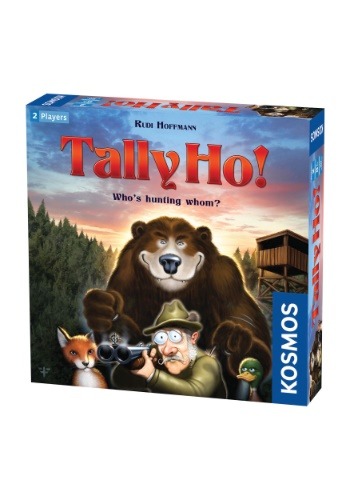 CHESS IN THE WOODS

Are you a fan of chess but a little bored with all the strategy and the erudite environment? Need to stretch your legs a bit and bring in a hint of luck to your tactical positioning as well? Well, that means it is time to head into the woods and yell out your hunter's call for Tally Ho!

This is one of the KOSMOS two-player series that will have you playing hunter and prey in an artfully rendered wooded terrain. In this 30 minute game, you'll play two rounds where one player becomes the (orange) hunters and the other becomes the (blue) animals. In the second round, you swap. Each turn, a player flips one of the woodland tiles to discover one of the possible denizens: hunters and lumberjacks (orange), bears and foxes (blue), ducks and pheasants (green) or trees (obstacles).

Players may move their team or neutral animals in an attempt to capture the types of tiles a moved tile can hunt. For example, a fox may hunt the neutral animals, a bear can chase off the humans, the hunter can go for any animal, and the lumberjack can clear out trees. When all tiles are flipped, each player takes five more turns to hunt more tiles or escape the area, and then you add up your points! Swap roles for the second round and see who has the most points to claim victory.

A GAME OF LUCK AND SKILL

Most games require a hint of both but very few games balance luck and skill together! In Tally Ho! you'll be crossing your fingers for a tile you like and thinking strategically about how to maneuver them to protect yourself while claiming your territory. (No requirement to yell, "Tally Ho!" but we think you'll have fun doing it!)