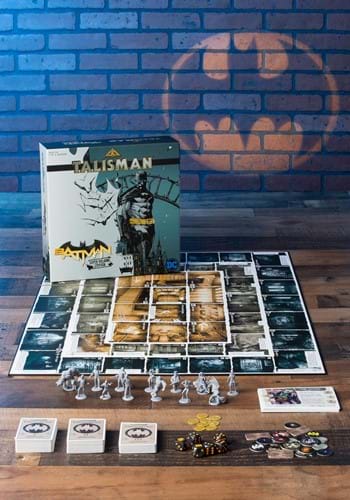 The Villains, of Course!

What is the best part of the Batman franchise? If you saw the heading, you already know our answer. Naturally, we love Batman. He's clever. A genius, in fact. (You don't get called the World's Greatest Detective for sub-par grades, after all.) But, throw on a cape and go on a gothic adventure to save your city. Let's face it. Without astounding villains, that story is going to get old really fast. So, we don't think anyone can blame a person for wanting the villains to win... once in a while.

It's time for the villains to rise, for once, and you can be there to make it happen with Talisman: Batman - Super Villains Edition. If you've played Talisman already, you're already good to dive into Arkham Asylum and get ready your escape in this 2-6 player game. If not, here's the things you need to know. You'll start by picking your favorite of 13 villains from the New 52 era of DC Comics, each with their own unique stats and special powers. For the next 60-90 minutes, you'll roll dice to determine your movement around the various rooms of Arkham Asylum, gaining power, climbing to the upper floors, until you can unlock the relics needed to finally confront the Caped Crusader. Be the first to bring down the Bat... and then turn on your co-villains to name yourself the Ruler of the Criminal Underworld!

The villains have been trying for years to stop Batman and claim the city for their own. Well, now is the time. With Talisman: Batman Super Villain Edition, you lure the Bat to Arkham Asylum to pave your way to true infamy!