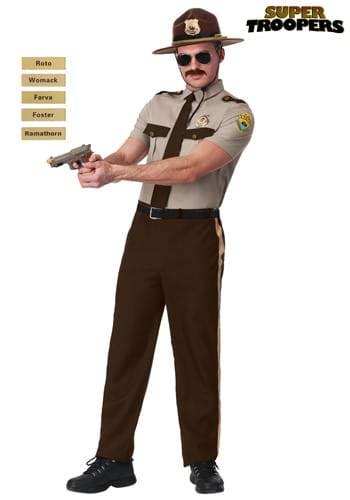 For the longest time, we thought that ABBA had been singing about the highway patrol. Really, if you think about it, those lyrics get pretty close. 'Beams are gonna blind me' and they're 'gonna find me' and even right down to what sounds like a rescue mission when the sight of the Trooper is going to prove that folks are still alive. It's pretty darn convincing... at least until you realize that they aren't talking about troopers at all. It was a real let down, let us tell you!

But, we got to thinking about our favorite Troopers out there. They're definitely some performers, honestly. They are always smiling and having fun. Admittedly, that's probably because they're pulling pranks on each other, but it still totally counts. They're hunting down adventure. They all think of themselves as the best team in all of Vermont. We're pretty sure that they'd do pretty well if they got on stage to perform. (Well, most of them would, anyway.)

Transform to the star that we all know you are when you wear this Super Trooper costume! This is an officially licensed costume, Made by Us in our own design studios. You have the whole ensemble so you can become any of your favorite characters from the hit film(s). The shirt features patches, shoulder straps, and your official-looking badge. The elastic pants have a dark tone and a stripe down the leg. Your hat gives you something to tip when you're pranking your fellow officers and you can choose between five nameplates to decide which character you like the most. (We even have a mustache kit if you need to go the whole way!)

You might not be totally on board with the idea that a State Trooper is the same thing as a performer... but we would like to direct your attention to the star on this Super Trooper's badge. Do we need more evidence than that!? Either way, you're going to love living out your movie dreams in this costume.