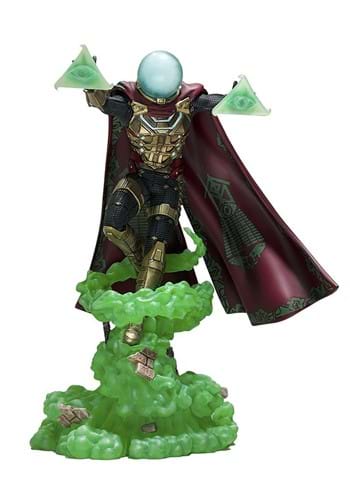 Too Good Too Bad

Man, we wanted to like him. He seemed like such a nice guy, with some brand new powers! He could fly like Thor, show glowy beams from his hands like Doctor Strange, and he even had a cool suit like Iron Man. Of course, we found out he was just a power-hungry villain with access to some crazy tech... but we can always dream of what if could have been like if he became the newest member of the Avengers! Sometimes, that's what we imagine when we look at this amazing Spider-Man: Far From Home Mysterio 1/10 Scale Statue!

This officially licensed statue comes from the Marvel-Sony movie, Spider-Man: Far From Home. It captures every detail from the movie in stunning detail, including the texturing on his armor and wrinkles in his cape. The paint job also does a great job of capturing Quentin Beck's alter ego. He's mounted on an ethereal-looking layer of green smoke to make it look like he's flying and his hands have small, triangular glyphs on them. If you want to add a touch of mystery to your collection, or you just want to imagine what it would have been like for him to be a hero, then this is the collectible for you!