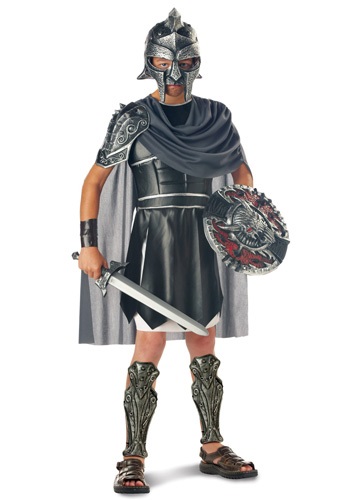 So, you're little one wants to fight in the noble legions of the Spartan army? Well, we gotta tell ya, training is not going to be easy! When they are fighting for Sparta, they are fighting with the best of the best. Unfortunately, this means that they'll be practicing with the best of the best too! This means that all of the sparring they'll be doing in training is undoubtedly going to leave a few bruises.

But it'll be worth it! After they finish their training they will officially be a part of the Spartan army. This means that they'll be ready for anything. They'll be a part of the strongest fighting unit of their time, and they will be ready to defend Sparta from anyone that tries to cross their borders. Even the other Greek city-states, Athens included, will fear them.FUN

This costume comes with everything your kid will need to look like a combat professional! They'll be wearing some impressive body armor with a cape on their back, making everything they do look like the stuff of heroes. The costume also comes with the shin guards and shoulder guard, leaving them well protected no matter what happens. Just in case, we thought we should include the helmet as well. You can never be too safe when it comes to our youngest generation! All your kiddo will need is a sword and shield, and they will be ready for battle!

When your child becomes a Spartan warrior, make sure the power doesn't get to their head! Just because they are a part of an elite fighting force doesn't mean that they get to put their elbows on the dinner table. We have found that even the strongest Spartan warriors remember their manners after a five minute time out in the corner. Good Luck!