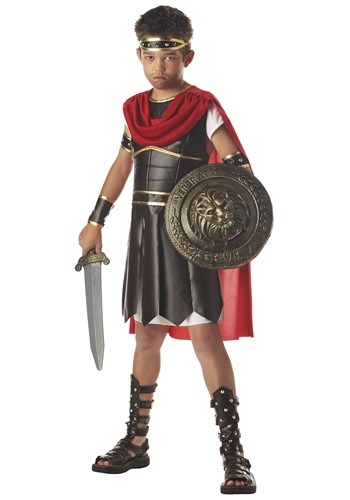 Does your little guy want to charge across the breadth of Europe with the might of Rome at his back? Does he want to charge into battle behind the genius strategies of Julius Caesar or Marcus Aurelius? Of course he does! He doesn’t want to be one of the beaten hordes of Galls or Germanians, obviously. So, it’s probably time to suit him up in his first set of standard Roman centurion armor. When you get this Roman Warrior Boy's Costume from the market, you’ll be able to see him get excited at the thought of joining the legion.

As part of the Roman force, not only will he help protect Rome and keep the barbarians at bay, but he will assist in building roads, aqueducts, and other infrastructure essential to the growth of the Empire. It’s all great character-building stuff. As part of the legion, your little dude will get to see the world, and then conquer in the name of Rome!

This fierce warrior look is crafted closely for the standard Roman style of ancient times. The full outfit features a pullover tunic and foam body armor front with fabric ties in the back, as well as an attached cape. You can’t have a Roman warrior without a cape! Included arm bands and leg guards have hook and loop fasteners and are excellent for agile movement and protection from light impact. The headband ties at the back fo the head and informs any enemies that Rome is here to establish itself and no one is going to stop it.

Just make sure you get your little guy to send postcards from all of his travels. The corners of Rome touched all the way from England to the Middle East, so we’re sure he’s going to see a ton fo interesting stuff that he’ll want to write home about!