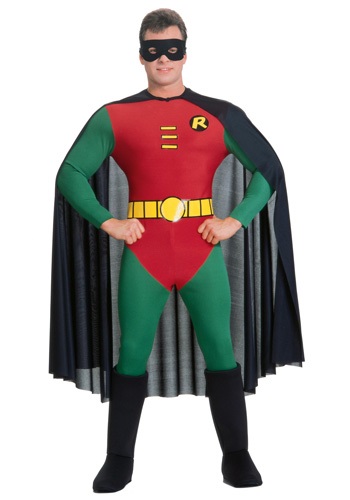 So you’re going to dress up as Robin, the Boy Wonder. He’s one of the most recognizable superheroes, so that’s a solid choice. But which Robin’s green and crimson cowl were you planning on donning? Because the title’s been passed around a bit, and unlike the with the big names like Superman and Batman, it tends not to come back to a character after they’ve graduated from Batman’s tutelage. So let our resident Gotham expert give you the rundown of all your options.

Dick Grayson, the original Robin, was the son of circus acrobats, which was a cool, realistic explanation for why a child could jump from rooftop to rooftop back in 1940 when circuses were popular. After decades of arrested development as Bruce Wayne’s young ward and leader of the Teen Titans, little Dick eventually assumed a new identity and stepped out on his own as Nightwing. As Nightwing, Dick was voted the Sexiest Male Character in Comics in a 2013 ComicsAlliance poll, proving that good things can come from patience.

Jason Todd, Dick’s replacement in the turbulent 80s, was a street-wise, greasy-haired punk who Batman first encountered trying to steal the tires off the Batmobile. (Oh, and he was also the son of murdered acrobats. It was kind of a requirement for the position back then.) Readers never quite clicked with this new Robin, and when offered the chance to kill Jason off in a 1988 poll, they took it. Jason was subsequently beaten to death by the Joker with a crowbar in the comics. (It was a dark and gritty time for Batman comics. Let’s not even talk about what happened to Barbara Gordon.) Later, because of comics resurrection magic, (duh) Jason came back as violent vigilante the Red Hood to show Batman the error of his nonlethal ways, eventually becoming an uneasy erstwhile ally to the Bat-family.

Tim Drake was designed as a happy, audience-pleasing medium between the goody-two-shoes and almost-bad-guy extremes of the two former Robins, but the result is that he didn’t have much of a personality. He fights crime with a bo staff and headed up Young Justice, eventually renaming himself Red Robin when Batman took a new apprentice.

We could go on, but we’re running out of space. If you’re a gal looking to rock a non-gender-flipped Robin, you’re in luck: one Stephanie Brown served as the Girl Wonder after Tim Drake’s tenure. Then you’ve got Batman’s biological son with Talia al Ghul, Damien Wayne. Then you’ve got your Joseph Gordon Levitt Robin from The Dark Knight Rises, whose given name was apparently Robin. With so many options to choose from, the Nolan brothers’ choice to make up a new Robin was a little puzzling, but we were all willing to give them a little leeway on their victory lap. Feeling overwhelmed by your options? Why not take the same leeway for yourself and make your own Robin! With so many to choose from, only the biggest DC Comics fans will know the difference!