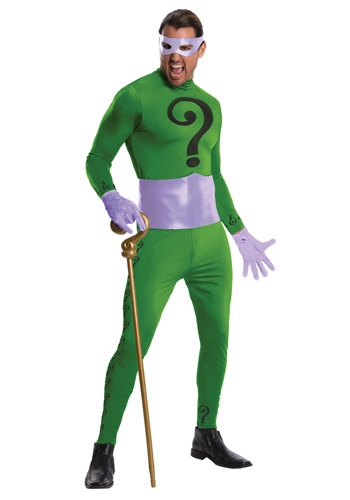 "A crime is no fun without riddles. I'll have you know that's the main reason I took up this crime game.” — The Riddler

Riddle us this, Batman fans! Do you remember one of the greatest original villains from the 1966 Batman TV series featuring Adam West?

And if you do, what has two green legs, two green arms, a purple belt, and a (pretty obvious, to be honest) question mark emblazoned on his chest? That’s right, one of the sneakiest and admittedly most frustrating villains, The Riddler! Talk about a throw-back! Personally, we can’t handle riddles — they’re so darn tricky! — but nobody makes us want to be able to answer one with swift and ease than this guy! Of all the dastardly villains that have taken on the caped crusader, none is more clever than the Riddler. He spends basically all of his time crafting the perfect riddle to stump Batman and Robin before he completes his crime. Which is pretty genius! Unfortunately for The Riddler, however, Batman and Robin don’t have any time for that nonsense (and neither do we!)!

But if you do, then this Riddler Classic Series Grand Heritage Costume is your one-way ticket to some straight up cosplay costume cred! Modeled after the Riddler's look from the Batman TV series, it’ll give you all the chances you need to pull a fast one on that dark knight and his sidekick! Just be sure you have a few riddles of your own to impress the citizens of Gotham with!