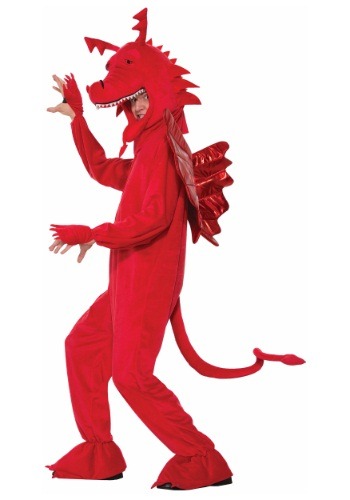 A friend of yours is determined to make it to your costume party tonight. Really determined. He’s coming from way out of town, and already his car broke down, he’s hit some terrible weather, and to top it all off, his phone died. That’s just a rough night for him, full of challenges and obstacles. But he swears he’s going to make it—at least that’s what he said when he called from the payphone two cities over (kudos to him for finding a payphone, by the way). Well, guess what, not to be mean to him or anything, but his challenge is just beginning. He’s dressed as a brave knight, so obviously, he’s going to have to fight a boss battle to get in. It’s the law of nature. You can’t take pity on him. You’re dressed in this fearsome Adult Red Dragon Costume; a battle must ensue!

You’ll have to station someone as a lookout—but when he finally approaches from down the block, that’s when you’ll race out to meet him. No knight is welcome in your castle until you’ve been defeated! Even one who really could use a break tonight.

It’s ok, he’ll understand. Once this knight gets a look at you standing your ground, ready to challenge him, he will know what he needs to do. Altogether, this ensemble consists of a full-body jumpsuit with sewn on wings and a tail, as well as a soft-sculpted face. Hand and foot covers are sewn in and make the entire costume as complete as possible. You won’t be able to fly or breathe fire, but we’re pretty sure you’ll be able to think of some kind of major boss attack move to keep the hero on his toes. Your friend won’t know what to do when he sees you, except draw his sword and begin the battle!

Of course, as soon as your friend proves himself in combat, the two of you should totally enjoy your time together! Walk into your house and grab a beverage, and allow him to feel so proud that he made it to the party despite the many obstacles, namely you in this fierce costume!