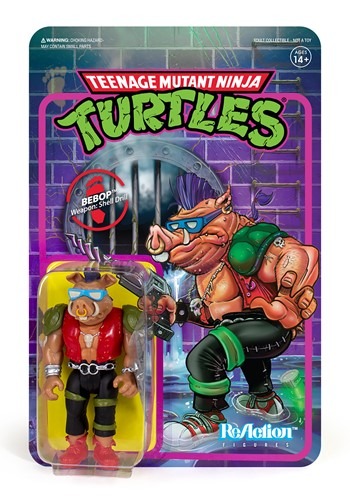 Coulda Been the Next Charlie Parker

Have you ever wondered how Bebop got his name? We like to think it's because he was an aspiring young jazz musician before being exposed to mutagen. Perhaps he was the top tenor sax player in all of New York City. Perhaps his blazing solos were really lighting up the world of jazz fusion. Perhaps he was on the path to becoming a true music legend before being transformed into a grotesque human-boar hybrid. You know, his pudgy mutant fingers are too clumsy to handle a saxophone now and maybe his entire career came to a crashing halt once he became a mutant. It would really explain his anger issues!

Of course, this all pure speculation. He may have just gotten that nickname to match his bud Rocksteady, but we still like to ponder.

Anywho, you can have your very own Bebop when you get this TMNT Reaction Bebop Action Figure. He's based on the classic character from the 90s Teenage Mutant Ninja Turtles cartoon. He has limited articulation to give him a retro look, like the original action figures from the show. You can make him fight your turtles action figures... or send him on a journey to reclaim his budding career in jazz.