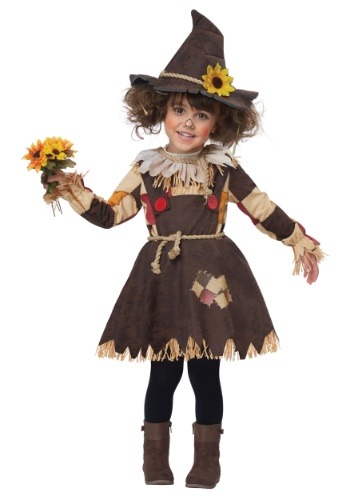 So here's the thing. We're big fans of fall. That's right: pumpkins, gourds, fall colors, spiced flavors... you name it, we like it. So it should really be no surprise to you that we have Indian corn, dried corn stalks, and bales of hay in every corner as soon as it's September. But, what would all this delightful fall decoration be without a cute little scarecrow here and there?

We know, we know, everybody thinks that scarecrows are meant to be scary. They expect flies and burlap and big scary stitches. Not the case! Everyone who thinks that has got it wrong. After all, scarecrows aren't meant to scare us. Scarecrows were originally put up in the field to scare birds away. (Scare the crows, get it?) Then the horror industry got a hold of it and ruined everything (like usual). Now everyone thinks scarecrows are meant to be some spooky creepers in the night. Not true! Scarecrows are there to protect the crops, and as long as they look vaguely humanoid, they'll do great at spooking off the birds. Since that's the case, we think it's perfectly reasonable for people to make their scarecrows as cute as possible.

For instance, if you had a little one who was feeling fall-inspired and wanted to dress up like a scarecrow, well then our Toddler Pumpkin Patch Scarecrow Costume would be the perfect option. Our outfit has a dress styled to look like a pinafore with patchwork skirt. It has a built-in petticoat with fringe, and a fringed collar. There are hooks and loops at the back of the dress and collar to fasten it closed, and there's a rope that can be tied around the waist as a belt. Lastly, there's a foam hat with fabric flower attached. In this ensemble, your little fall-enthusiast can show off their harvest spirit while successfully being an non-scary scarecrow!

You know, now that we think of it, maybe it's the name that throws people off. It does, after all, have "scare" in it. Maybe it's time for some rebranding! A Charming Crow? Maybe a ScareCute?... Yeah, we'll keep working on it.