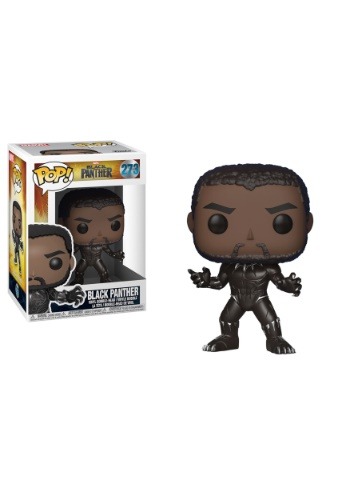 Even when the crown is actually a necklace and a supernatural suit, the head that wears the crown is still heavy. Leading a nation isn't easy. Especially when that nation has a secret technology that could make the world a better place. T'Challa had a lot to learn even though he'd been training and learning about this his whole life. How could he know all the secrets about the nation? Well, he wasn't on the throne long before realizing that the walls that his ancestors built resulted in some serious trouble!

T'Challa is ready for action in the form of this Pop Vinyl figure. He's got his claws out and a wide fighting stance. He's wearing his sister, Shuri's ingenious design so whatever comes at him is sure to only make him stronger. Which is a good thing because this figure is only four inches tall!

Now you can relive the inspiration you first felt while watching The Black Panther for the first time every day when T'Challa is on your desk. Every time you sit down at your primitive, non-vibranium computer and look into his oversized eyes, you'll feel it. He wants you to keep fighting the good fight. He wants you to keep building those bridges!