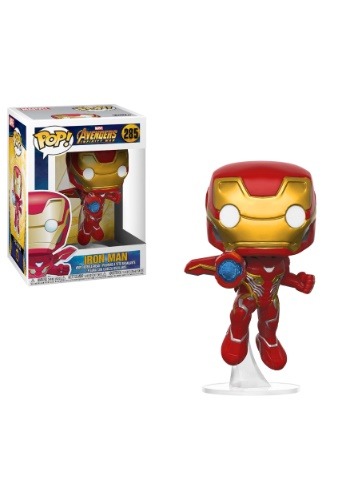 ALWAYS KNEW HE WAS BIG-HEADED

It takes a certain amount of egotism to take on the role of a major businessman in the world.  All the more if that business is going to have your name in giant letters, broadcast across the city, world, and maybe even galaxy.
So, it shouldn't come as too much of a surprise that Tony Stark is one of the few out there who not only used his big brain and bigger bucks to become a power-suited superhero but then proudly admitted to the world exactly who he was!

Bring some heroic fun into your home with this officially licensed POP! Marvel Avengers: Infinity War Iron Man Bobblehead Figure.  This 4.5" tall figure features Iron Man in his iconic red and gold suit, hovering in mid-flight over a sturdy base.  His oversized head and giant gleaming eyes will watch for any danger or new opportunity.

AN IRON SUIT IN PERFECT PROPORTIONS

The thing about making a powersuit out of metal or even vibranium is that you have to have those measurements really precise.  There's no "letting out" a pair of iron pants!  So, we weren't sure if this POP! Iron Man Figure was right given the head size.  Though... we're not sure if his head is actually considered oversized or just finally in proportion!