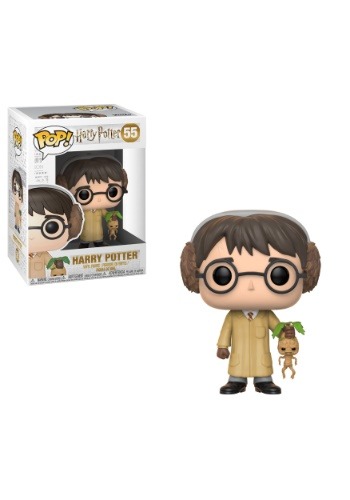 Do You Be-leaf In Magic?

So many of the Hogwarts professors are occupied with maintaining a dignified position at all times. We get it, magic is serious stuff. But Professor Sprout is just as magical but a lot more down to earth. She has dirt under her fingernails, hair that won't be tamed, and a sense of courage that is just as lively. She tends to that courage in her students as well, just as you might water, weed, and prune a greenhouse treasure. Speaking of greenhouse treasures, we're pretty sure her mandrake lesson was the first seed of courage she planted in her students. Just imagine repotting a root as wild as the ear-splitting mandrake!

This Pop Vinyl figure shows Harry in his first-year Herbology class. Any Harry Potter fan will instantly recognize that this figure represents the moment when all the first years were introduced to the Mandrake. Harry stands just over three inches tall and has a one-inch Mandrake in his hand.

Want a Harry Potter collection with flow? This Harry mandrake figure can be paired with a Ron and Hermione that are also holding the rowdy root. The perfect present for green-thumbed fans of the wizarding world, folks are sure to root for your as soon as they see this figure on your display!