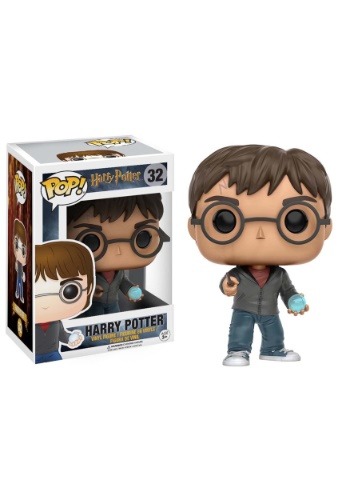 Here's the thing with prophecies, you never know when a prophecy is fulfilled because the seer was correct about the future or because the person that the prophecy was about retaliated against their future. If Voldemort hadn't rallied against a one-year-old child then Harry Potter wouldn't have been "the boy who lived" and come to defeat the dark lord.

All questions of prophecy philosophy aside, we think that creepy storage with all the shelves of swirly mysterious globes that wizards call the Hall of Prophecy was pretty awesome, too bad the battle between good and evil kind of ruined it, destroying hundreds of years of soothsaying.

The mysterious power of those swirling globes is one of the reasons we love this Pop Vinyl Harry Potter figure with prophecy ball. Whether you want a reminder to be wary of prophecies less they put you on a reckless path or you simply want to collect all the awesome Harry Potter Pop vinyl figures, you'll enjoy having Harry holding the swirly blue prophecy orb.