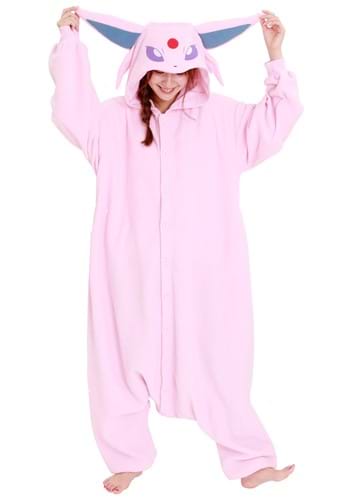 Why do Pokemon trainers battle it out with each other time? You can't even walk more than a few steps before some wannabe champ strolls up to you and challenges you to a battle. Why can't we all just snuggle with the Pokemon? Most of them look ultra-cuddly, so we'd rather curl up on the couch and watch a movie with our Pokemon friends!

If you've ever felt like cuddling up with your favorite Pokemon (instead of battling with them), then maybe you're ready for this Pokemon Espeon Kigurumi for adults! It's an officially licensed costume from the classic Nintendo video game series!

Inspired by one of the cuddliest Eeveelutions, this kigurumi is a pajama costume designed to look like Espeon. It's made out of a light pink fleece material that's as comfy as it is adorable. The front of the pajama jumpsuit closes with buttons along the front, while the back features a forked tail at the bottom. The hood has embroidered details on top and a pair of pointy ears on top to help you look just like Espeon when you flip it up. When you have it on, you'll be ready to snuggle with all of your Pokemon pals!