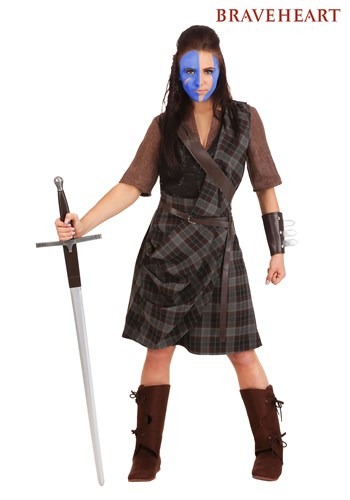 Til You're Blue In the Face

Are you ready to take on the fight for freedom? There plenty of ways to fight for the rights of those who are oppressed and downtrodden these days. But here's the thing, it's hard to beat the romance of fighting for freedom in the highlands of Scotland. Can you imagine what it would have been like to team up with your kilt wearing compatriots while the sound of the bagpipe was carried on the wind? When the Scottish warriors stood on the wind-blown landscape that they were fighting to free as the British army cam to calm the descent, they created an image that would capture the imagination of people around the world for centuries to come!

Are you ready to get in touch with the romance of William Wallace's fight for freedom? Slipping into the plaid and faux leather of this costume is sure to give you an inside scoop to the Scottish struggle for independence. The wild moors are not included but put on some bagpipe music and you'll be in the right mindset!

This Made by Us costume has a natural plaid pattern that's fashioned in a long kilt and drapery around the shoulders. A battle-ready halter fits over both the top and the drapery. The top has an aged leather texture and short sleeves with a homespun look. Finished off with a matching gauntlet with metallic fabric spikes. Finish this costume with tall boots or high socks and a warring hairstyle as well as the blue face paint seen in the movie, Braveheart!

When it comes to battle-ready looks, the soldiers of Braveheart were on top of their game! This costume has a fit that lets you move with ease and yet makes you feel fabulous. Cue the bagpipes!