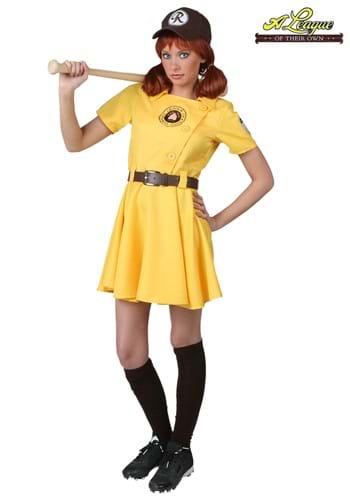 Plus Size A League of Their Own Kit Costume

Anything You Can Do...

Sometimes, having a big sister can be a real pain. Everyone always tries to compare you to her, no matter how talented you are! You could be the greatest baseball player the league has ever seen... and they'll still refer to you as Dottie's kid sister. If you've ever felt like you've been overshadowed by a sibling, then you know exactly what was going through Kit's mind when she decided to swap teams! On the Rockford Peaches, she was never going to get take control of her identity. Now, on her new team, she's ready to knock it out of the park. And when you dress up in this Kit Costume from A League of Their Own, you'll be ready to do the same!

This A League of Their Own Kit Costume brings you authentic style from the classic movie. The officially licensed outfit starts with a twill, short-sleeved dress with off-center buttons. It also has belt loops at the waist and embroidered patches on the bodice and the sleeve. The baseball cap has a patch on the front with a big "R" in the middle. The costume also comes with a pair of brown knee-high socks and a belt to finish up the look. Put it on and you'll be ready to tackle the next big game in the championship!

No matter how great of a ballplayer you are, you'll always need a good team to back you up! If you plan on heading out dressed as one of the best players in the league, then you might want to check out the rest of our costumes from A League of Their Own. With styles and sizes for everyone, you can have an all-star group ready to play in no time.