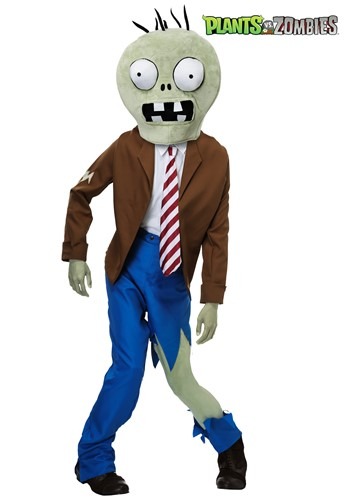 If you love zombies as much as we do then you’ve probably heard of the popular video game franchise Plants VS Zombies. You probably also empathize with those poor zombies. They are finally reborn into this world and then they’re attacked by vegetation. Not really the best way to be reintroduced into the world, it’s no fruit basket, that’s for sure.

Toss on this Plant VS Zombie: Zombie costume and become the number one advocate for these wrongly named antagonists. You can tell people that nowadays the zombies aren’t groaning “brrrainsss” no, instead they’re shouting “Grains!” The change of diet really helped their cognitive skills, so they can shout now. Sadly fear still causes people to hurl tomatoes and heads of cabbage at these innocent reanimated corpses, rather than trying to understand them. So someone needs to take a stand and that someone can be you! Just don’t be surprised if you take an onion or two to the head while walking around in this costume.

This costume is made up of 100 percent polyester. The front of the shirt has a hook and loop fastener at the back of the collar. There are also ribbon ties at the waist. The jacket has turned-up cuffs, and an appliqued patch on the right sleeve. The pants have an elastic back waistband as well as a false fly in front. A necktie with an elastic band is also included. The headpiece is soft-sculpted velour and allows limited vision through the mesh-covered character mouth.

A Diet to Die For

Make our very own officially licensed Plants VS Zombie: Zombie yours today. Start letting people know that zombies have changed and that they should be allowed to roam the earth like every other living(dead) creature! But be careful, you never know when a farmer that didn’t get the memo about your new diet may try to chuck a couple of carrots in your direction.