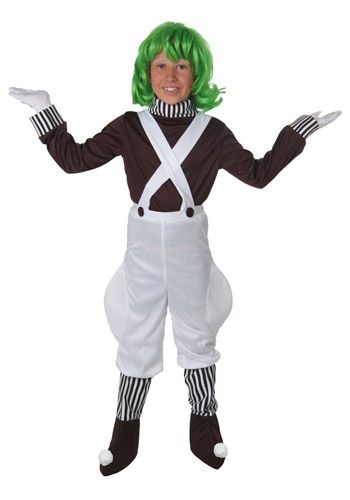 We believe that chocolate factory workers might make the best team out there. Out of all the football teams, baseball teams, track teams and debate teams, no one can work together like these guys. Just imagine them out on the soccer pitch. They might be a little short, making the goalie a tough position, but they could stack up on each other's shoulders, making an impenetrable two-man goalie.

So, lucky for the rest of us, they seem content to just keep working in the chocolate factory. Because if they decided they got bored of making candy and wanted to try something new, we are confident that they would dominate whatever they put their mind to. If this crew really tried, we bet you would see them in the Superbowl next year.

Part of these workers' cohesive teamwork comes from their outfits! When everyone is dressed the same, it makes them feel equal and more like a team than individuals. All of the chocolate factory workers wear the same thing: this Kid's Oompa Loompa Costume. They wear a brown shirt with striped cuffs and a mock turtle collar. Over that, they are sporting white overalls, and they also wear the same brown and white boot covers! But their connection goes beyond just their clothes, they even wear the same hair! Every single chocolate worker will be sporting the same green hair, which we have given you in the form of a synthetic wig.

In this look, your little ones are so good at working as a team, we honestly believe that they could take over the world if they tried! So, it's a good thing that they are content to keep working in the name of sugary goodness—just making chocolate and scolding bratty kids. But, if they ever get bored, you've been warned!