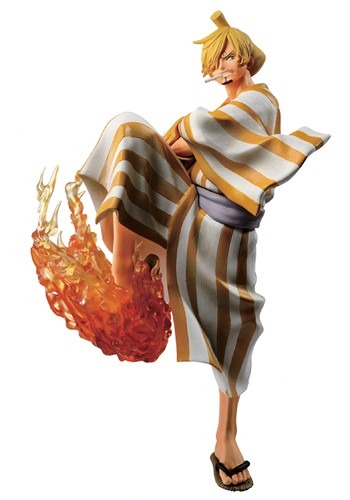 Sanji is one darn good cook. It's his passion. It's something that he's always worked at, ever since his days under the tutelage of Zeff. He can keep the entire Straw Hat Pirate crew fed on gourmet meals with nothing but table scraps. His other passion? It's kicking so hard that his feet burst into flames as he's fighting.

Yep, he's not only a great chef, but he's also one of the fiercest fighters on Monkey D. Luffy's team. He's been with Luffy since the early days, and he's ready to find the ultimate treasure, while honing his deadly martial arts skills. And this One Piece Sangoro Full Force Ichiban Collectible Statue. It showcases Sanji Vinsmoke, ready to battle it out in his comfy kimono garb.

This One Piece is an officially licensed collectible from the amazing Eiichiro Oda anime series. It's made out of molded PVC and has Sanji frozen in a dynamic pose with his foot raised and bursting into flames (to lay a beatdown to some baddie, no doubt). This highly detailed figure has a realistic color-scheme that matches his look from the anime series and he'll look great in your collection!