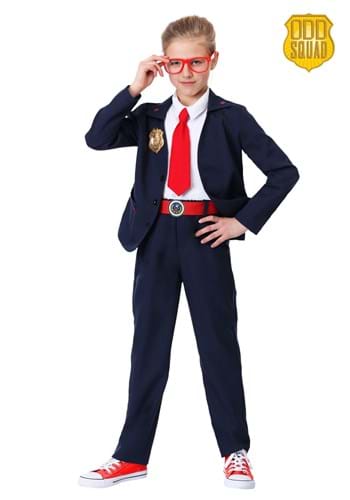 Well, This Just Doesn't Add Up

Are strange things happening around your home? Disappearing cookies, missing socks, and mystery slime. It sounds like you need the Odd Squad on the case. Using math to solve strange happenings, these government agents may be young but they're capable. They've taken care of a bad case of body switchers, an out of control ball pit, recovering countless stolen gadgets, and quite a few monsters. Using math, science, and general problem solving, these kids can do anything. You can say these kids have a lot of responsibility for kids that aren't even legally allowed to drive. But thank goodness they're ready for action cause those Hydroclops seem really nasty.

This licensed Odd Squad costume is sure to inspire your child to keep up with their math and science skills cause you never know when the next odd happening might occur. In the meantime, this suit will make them feel capable. It features a dapper blazer with red accents and an Odd Squad badge that can be pinned to the breast. A shirt front with an elastic-backed red tie will add a sense of polish to the look. The matching pants are comfortable with an elastic waistband, making them great for playing agent. They're topped off with a belt that's decorated with the Odd Squad icon so everyone will know that they're in safe and capable hands.

On With the Show

Do you have a household full of Odd Squad fans? Well, a squad isn't a squad without more than one agent. Luckily for you, friends and siblings can dress up as the various characters in the show. From scientist to Ms. O, kids can pick the role they want to play. There's a lot of strange happenings on Halloween night. Luckily, the Odd Squad will be there!