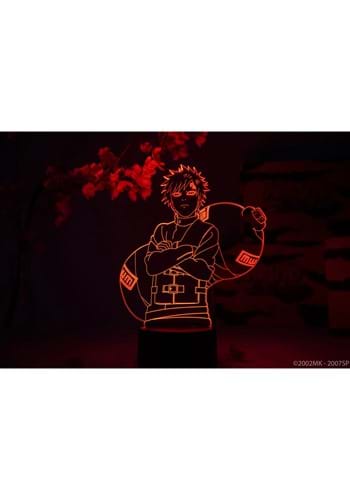 The Fifth Kazekage started with a dark history. Before he was born, Gaara's father, the Fourth Kazekage Rasa, had Chiyo make Gaara into the Jinchuriki for the tailed beast Shukaku the One Tail. This essentially drove Garra insane had he had to be stopped by Naruto and his friends. Eventually, he grew up, became the Fifth Kazekagehe, and matured into a smart leader who confidently led his people to prosperity, even with their harsh desert climate. If you want to light up your space with a natural-born leader, look no further and check out our officially licensed Gaara Naruto Shippuden Otaku Lamp. The remote base allows the users to change the LEDs to any of the 16 available colors. Switch things up and use flash, strobe, fade, and smooth features as well. No Wind Jutsu users to power the fan turbines? No worries, you can even use the USB as the power source or go wireless and use 3 x AA batteries. Help keep Sunagakure's leader from going back to the darkness and pick up our Gaara Naruto Shippuden Otaku Lamp.