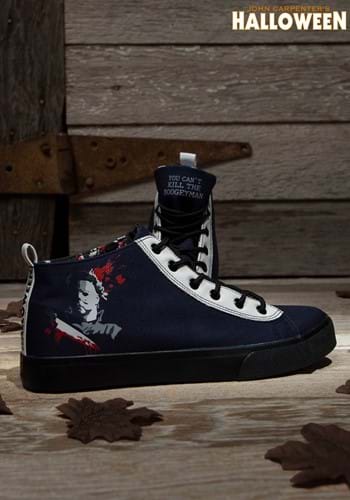 Mike isn't much of a talker. He's not really a fan of parties or hanging out. Actually, he's not really good with people at all. Does he let that stop him? No sir! He gets out there and does the best he can... which usually ends in plenty of senseless killing by knife. Then again, what else would you expect from the greatest horror movie villain that the world has ever seen?

Well, we're big fans of the Halloween movies, which is why we're excited to bring you these shoes inspired by the murderous character. The Michael Myers Halloween Low Tops are officially licensed and officially gruesome!

These shoes combine Michael Myers with a classic low top style. The shoes come with a printed image of Michael Myers on the side, complete with blood splatters and a knife for deadly effect. The shoe also has white accents near the eyelets and along the backstrap for color contrast. Finally, the tongue has the quote "You Can't Kill the Boogeyman" for added creep factor. You can wear it to get yourself into the Halloween mood, or just a bit of horror movie style into your everyday wear!