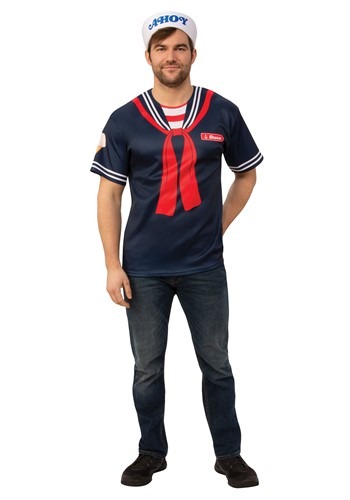 We've been through a lot of ups and downs with our pal Steve. After he let his friends trash Nancy's reputation, we thought he'd never redeem himself. But then he flaunted his skills with a baseball bat and we were thoroughly onboard. Still, he didn't make the best boyfriend. Everyone has their flaws. And he really shined when it came to babysitting! Our favorite flavor of Steve Harrington? That would be Scoops Ahoy Steve. Humbled in his uniform, he might be striking out with the eighties ladies that pass his way but he's sure charming his viewers. Operation child endangerment might not be something that Steve will put on his babysitting resume but we're pretty sure his tussle with the Russians should earn him a permanent promotion in our hearts!

Scoops Ahoy really knows how to stick with a theme. And while Steve might have thought the policy of the Sailor's cap was inhibiting his greatest asset, we think it really makes the sweet nautical look complete! This costume shirt is printed with all the details from Steve's uniform from the ice cream cone on his sleeve to the nautical collar to his name tag. Top the Ahoy hat and you'll be ready to take on whatever adventures Starcourt might have on offer.

Diving into Stranger Things refreshes all things eighties era. How much fun is it to revisit the colors and perms of that fresh, bygone era? This costume doesn't have to be limited to Halloween events. Perfect for a Stranger Things viewing party (with a banana split bar?) or eighties themed events, this costume will be a hit wherever you go. And if you're feeling shy, just pair up with your friend, Robin. Sailing the seas of flavor is always safer with your mates!