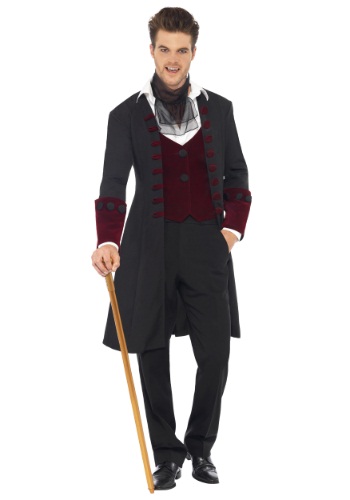 Welcome back to the world sir—You’ve been asleep in that coffin of yours for nearly 200 years! Not to worry we can get you up to speed. People have this thing called electricity now that kind of changed everything. They have televisions, which are kind of like a box that contains hundreds of different live and pre-recorded, erm,  puppet shows made of light? It’s very complex, yes. They also have tiny versions of those boxes that they carry around with them and it allows them to communicate instantly and across the globe either by writing or merely speaking into it. How do they work? You know what,it’s magic. That’s how it works. We can tell you’re an old-fashioned gentleman so we don’t suppose you’ll be readily trading in your cravat for yacht shorts. Luckily we have something on hand that will suit your tastes perfectly. Our Men’s Gothic Vampire Costume will help you look your Bram Stoker best!

This brown frock coat jacket features elegant sewn-in red velvet vest panels, a well as eight decorative velvet-covered buttons and corresponding velvet loops. The included cravat is black knit mesh and fastens around the neck with Hook and Loop fastener. What’s Hook and Loop fastener? Well, it’s this kind of... it’s magic. Shirt and trousers not included in this costume, so be sure to order your knickers and ruffled-collar shirts or else you’ll have to take your chances at the mall (malls are a bunch of shops all smashed together).

There’s still some things we need to catch you up on before you’re let loose into the night. World War I, World War II, the Internet...it’s overwhelming and we’re not sure where to start. Maybe it’s better you just take a bite out of life and get out there, you can learn as you go! Whether you’re a Victorian era history buff, a sleep vampire, or just a stylish gent, our Men’s Gothic Vampire costume is sure to garner compliments this Halloween!