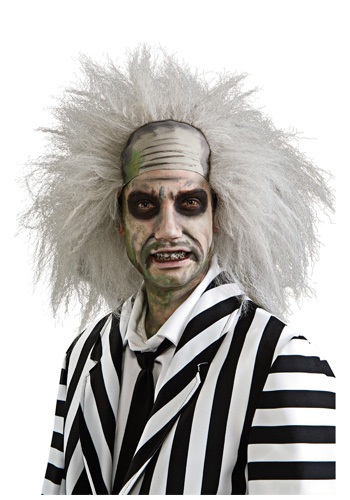 It’s one thing to find yourself suddenly dead and be thrown a copy of the Handbook for the Recently Dead and expected to not only read the entire freaking thing but understand all of the implications and all of this before you’ve even had a basic tour of the afterlife.  It’s quite another to show up to your homestead, hoping that things might be just a bit normal and then discover that you’ve been completely invaded by a bunch of nutcases who, even worse, want to redecorate your awesome pad and make it look… well, admittedly, pretty much awesome-er.  But that’s so not the point!

When your life is turned upside down, it might seem like it is time to retire or to shout out a few curses.  But, we’ve got an even better idea.  Trust us.  Just shout out the name of the Ghost with the Most a few times and you’ll be given the craziest time that you can imagine.  Need more evidence?  Well, just take one look at this fantastic Men’s Crazy Beetlejuice Wig and you’ll know just who you’re going to be dealing with.  Perhaps he isn’t the most calm of folks in the afterlife, but we can promise you that he’s going to give you an incredible time.  You don’t want a boring afterlife, now do you!?