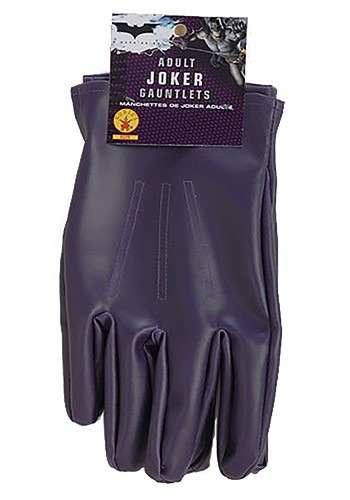 The Joker isn’t just some kind of low-class criminal. He doesn’t just walk around, stealing money from the mob just to get rich. He doesn’t cause mayhem for any sort of personal gain. He has bigger ideas. He’s trying to show the world a better kind of villain. He’s trying to cook up some elegant plans to foil Batman and Gotham City’s finest. That’s why he wears a full-on purple suit and that’s why he never leaves home without his gloves.

Do you want to get The Joker’s chaotic, yet elegant, style? Well then, just slip these men’s Joker gloves on your hands. These officially licensed gloves come from the Dark Knight film. They’re made out of a faux leather material and have a dark purple exterior that goes perfectly with any Joker costume. They’ll make your hands feel quite elegant as you’re facing off against the one and only Batman.