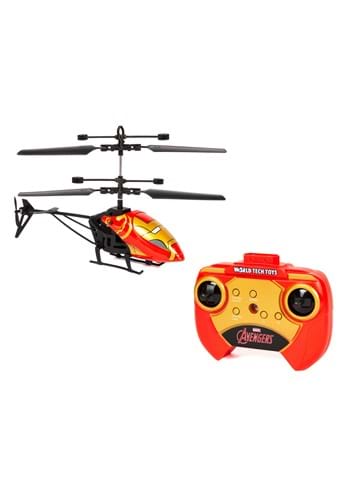 When Tony Stark designed the Iron Man suit, he used the leftover material and similar technology to build a helicopter for longer missions. While effortlessly flying through the sky in the Iron Man suit is cool and all, sometimes he needs a little lift. Instead of hitting birds head-on, the helicopter helps him have a more relaxed sky cruise. The helicopter has one-touch take-off for a straight shot to the skies. What is a good take off without an easy arrival? The helicopter has next level landing technology as well as a built-in gyro.

The Marvel Iron Man 2CH IR Helicopter can soar up to 32 feet in the air and as far as 32 feet away. The helicopter takes a short 15 - 30 minutes to charge up before it’s ready to hit the sky. It takes Iron Man in the sky for 5 - 7 minutes. You’ll need to see if your buddy Spider-man can grab 3 AA batteries on his way over to meet up before the two of you fight crime. Batteries are not included but are required for the remote. The Iron Man 2CH IR Helicopter is an officially licensed Marvel toy.