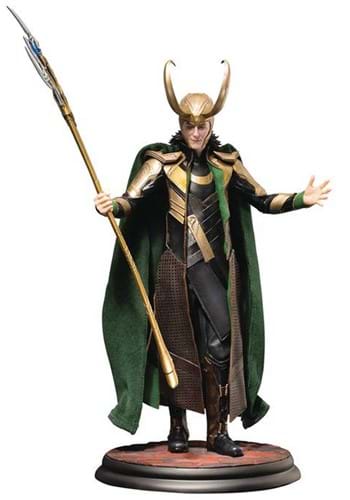 Loki has been around Marvel Comics since the late 1940s. He didn't really make a splash in the comic world until 1962, when the legends, Stan Lee, Larry Lieber, and Jack Kirby reworked his character into his own series, Journey into Mystery. Like in the graphic novels, Loki was the unintentional creator of the Avengers. He tried tricking the Hulk into causing destruction and (shocker) all of our favorite heroes show up and not only save the day but become friends. Since then he has taken many roles and forms. Being Thor's primary antagonist has seen him mostly doing the villain things, but on occasions, he has changed sides and helped the good guys. He even sacrificed himself one time to save his parents Odin and Freya. If you are a fan of Loki and need an officially licensed figure to put on display, you have to check out our Avengers Movie Loki ArtFX Statue.