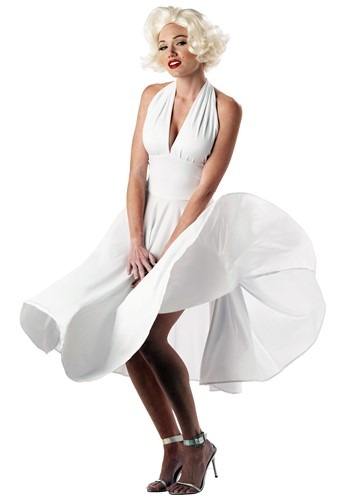 We have to admit: we're a bit old-school when it comes to movies. We like the age of long drawn-out romances. Of foggy, intense close-ups. Of a girl with sass. That's right, a killer leading lady made those movies. You know who we mean. Grace Kelly. Jayne Mansfield. But most of all? Marilyn Monroe of course.

There's just something so likable about Marilyn. Those pouty lips. Those soft winks. That breathy voice and fancy dance-number. That blonde was awe-inspiring. She had all that talent and a no-nonsense attitude to boot. Did you know she founded her own film production company? She was tired of being type-cast and pigeon-holed and decided to stick it to Hollywood. Not too shabby, eh? She had a fire and zip that we feel should be honored for all time.

And what better way to honor a famous actress than mimicking her? Alright, so maybe not everyone can mimic that pout and that sultry voice, but we can mimic her style at least! It's easy with this Marilyn Monroe Costume Dress. Made to look like the famous dress she wore for The Seven Year Itch, this dress is 100 percent white polyester knit. It has the deep v-neckline and halter-style straps of Marilyn's famous dress, along with a waist yoke that supports a full circular skirt. This outfit? Well, it's positively delicious.

So there you have it. The best of the best of Hollywood Actresses. Of course, there are some pretty sassy, firey actresses today, but nothing quite compares to those old whimsical pictures of Marilyn Monroe. What? Yeah, okay, so we're a little biased. Just let us have this, alright? Everyone needs to have someone (or something) to geek out over, and Ms. Monroe is ours.