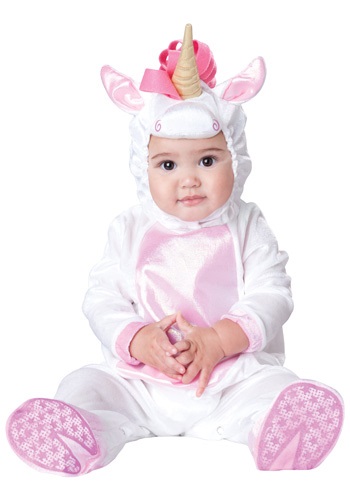 If we had to pick one mythical creature to bring to life, we'd pick unicorns. There are plenty of good contenders, but you simply can't beat unicorns! Sure, dragons would be cool. But if dragons were real, it'd be safe to say that humans would no longer sit at the top of the food chain, and that thought is kind of scary. It'd be cool to bring around the minotaur too, but we have the same problem with that as we do with the minotaur.

Unicorns are just like the perfect combination. They are like a horse, but they have that awesome and admittedly dangerous horn on their head. If unicorns were real, we would definitely want to have one as a pet. We'd keep it just like you would a horse. The only difference is you need to be a little careful around that horn sticking off of their head!

This costume will turn your child into our favorite mythical creature! They'll be wearing a white velvety jumpsuit that has a pink tummy and pink hooves on the bottom of the feet. The hooves have little grips on the bottoms in the shape of stars, just like we like to think a real unicorn might have.  They'll also be wearing the hood, which comes complete with ears, a nose, and a horn with a bow! The whole combination feels like a perfect representation of the magical happy creature that we hope to meet in person someday.

When you have a baby unicorn in your care, we aren't totally sure what to feed them. Do they eat hay, like a horse? Or maybe they eat rainbows or stardust. We aren't really sure what to give them, but we are sure you will figure it out. Good luck!