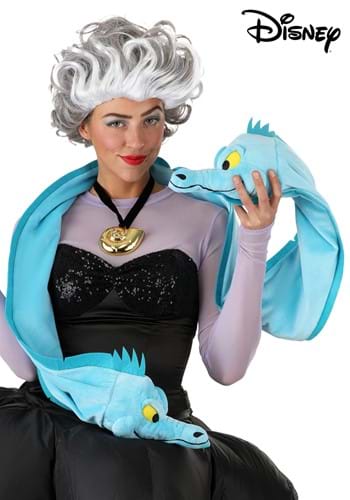 Some critters get a pretty bad rap. When you look just a little creepy or if you have an unusual physical trait, folks can think that you're probably evil. Add in a raspy voice or a glowing eye or two and you've practically confirmed it in anyone's mind. Then, of course, if you've got a twin floating around you that mirrors all the same quirks? Well, at that point, you may as well accept that you're a Disney villain's minion and settle down in an underwater grotto. But we're here to say that there are plenty of folks who would love you for the loyal creatures you are!

Just in case you have the same belief about the strange little eels that keep Ursula company, we think you'd love to claim this officially licensed Flotsam and Jetsam Scarf from Disney's The Little Mermaid as your own. This is a Made By Us design that is inspired by the way the sibling eels swim around the Sea Witch's neck. You'll start with a comfy velour scarf that measures 60 inches in length. Two soft-sculpted and fiberfill stuffed character heads finish off the scarf at each end. They have the same embroidered designs you recognize from the film, including bright yellow eyes and spiky fins.